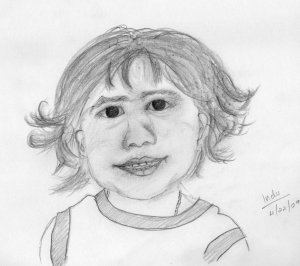 Being born to an artist should have propagated into me, some genes of how to hold a pencil. While at high school, like most children that age, I too was mesmerized with the sparkle and glitter of tinsel town. The mademoiselle’s who always have a fair complexion, without regular use of Fair and Lovely or other creams in the market. The women always so tall, or always depicted as if they were all over five feet six inches, without wearing fancy heels. Their perfect features, hair that always stayed in the right place and never blew with the wind. To catch glimpses of these beauties, I would tug at my father to buy me a new edition of Filmfare – the magazine with the most gossip. I loved reading what happened in their lives, consequently, I helped feed a few people, termed as the “makers” of Filmfare. The Filmfare magazine was about 25 rupees then, way too big an amount to spend to read gossip about people you could never relate to. So each time I made a trip by train/bus to my grandmother’s house, I was allowed to buy a “book” to read. I used those opportunities to buy my gateway to Tinsel Town, the Filmfare magazine. On seeing certain stars on the cover page, I used to be so thrilled, and couldn’t wait to open the book and read up every word on every page.
While flipping through the pages of a Filmfare, I found full page pictures of ladies of tinsel town. That inspired me to pick up a pencil and paper and try my hand at sketching. I managed a few portraits, and a few pictures of children from advertisement pages. After moving my eyes from the magazine to the paper a thousand times, I would make that final stroke and take a good look at my creation. With great pride, that I am my father’s daughter would show the masterpiece to him. After looking at it with squared eyes, he would say, ‘the lips are a little out of proportion’, ‘if you see the top part of the face, the eyes are not in the same plane’, ‘you need to add more details around the nose’, ‘the shading near the eye should be darker’ and so on.. Each of his statements, helped me in my next sketch.
This was more than 12 years ago.
When I joined engineering at Manipal, I had a room-mate called Ashley R. Ashley was an architecture student and had to submit 2 sketches every week. With her heavy work load, she asked me to do a sketch once. The next thing I knew, I was doing her sketches every week. This prompted me to buy a sketch book for myself and I started putting my genes to work. This time again, I went to the local store to pick up a recent edition of – The Filmfare.
This was 8 years ago.
Few months back, while walking through the stationery aisle to pick up a writing tablet for my four year old son, I saw a “sketch book”. Without further thought, I bought it; and kept it. Couple of weeks back, I opened the book and picked up a pencil. No, this time I didn’t have a Filmfare, I don’t think you get Filmfare at local stores in the United States. This time, I picked up a picture on my desk of my little one. Many years have passed, but with each stroke, I remembered my father’s words and tried to do justice to the picture and my genes. This is my rendition of my adorable Manikutty who spreads his smile to everyone around.
PS. Proportions around the eyes are still not perfect!

3 thoughts on “My own rendition of Manikutty..”