People who know my younger son, will instantly know what ‘W’ prefix means. When my little guy asks for something, we ask him, how many you want, coz he is never satisfied, he keeps saying ‘cann-i have some more?’ So when we ask him ‘how many’ his instant reply is ‘w’ and he looks at his hand, brings the thumb and little finger together and opens up the other three fingers, meaning he wants three. If it is something that he ‘lubs’ (loves) then he recounts the same three fingers to usually ten or twenty, the biggest numbers he knows and says, ‘I mean, I want ten’.
This little brat wakes up at the crack of sunlight seeping into my room and starts shaking me up, even on a weekend and says ‘amma wake up, its mornin time, see the sun is out’.. this happens even when there is no daylight sometimes. I tell him, ‘no kevi, its night, go back to sleep’ and this is at 9am sometimes on weekends :)..
He has to brush by himself, even on days when I miss the alarm. ‘I wannto do it all myself’.. and he takes ages to squeeze the teeny weeny amount of toothpaste from his train picture flouride-free toothpaste tube to his little Diego toothbrush. He brushes the same set of eight front teeth, over and over again for the next three minutes and spits out at regular intervals. After he’s sure that he’s wasted enough of my time, he says ‘ok, now its your turn’.
The first thing after brushing is his boon of life – paaa.. (Milk). And for this too, he has to pick his own straw, the straw I pick from the same pack of straws finds its place in the trash can.
Then he’s ready to watch some cartoon till I get ready to work. Mickey mouse, umizoomi, dora, diego, max and ruby, everything possible on Nick Jr and Playhouse Disney. He has his share of cornflakes from my bowl, picks up his show and tell toy and he’s ready to go to Grandma George – his daycare.
On the way, he wants either Chak de from Salaam Namaste or Zoobi Doobi from 3 idiots to play on the car stereo. These are the hot favourites now. If the sun falls in his eyes he says ‘amma, tooo sunny’.
Getting down from the car at Grandma George’s place, ends up in my arms and I ask him for W kisses, followed by more, more and more, till Grandma George opens the door. He waves bye and goes inside.
I wonder what he does in there. Eats, plays, sleeps, again plays and wait and waits till his mommy is back to pick him up. I feel so grateful to him, for spending his days at a childcare, longer than the hours I spend at work, silently understanding the fact that I need to work and he needs to be at someone else’s place with other kids, while I am gone.
The gleam in his eyes in the evening when I pick him up lights up the whole room. He comes running, hugs my legs and says ‘amma’, meaning to say, ‘i am so glad that you came back to pick me’. Does he have a fear that I may not come back?
Once home, he is all set to fight with his brother, making up for all the hours of the day followed by ‘I dont wanto tak-a baath..’ ‘Can I eat maamu (food)..’ ‘Can I watch a CD..’ ‘Can I have some appe joos..’ or complaints like ‘amma, i didnot find the remot, and you were making maamu, u did not come, and that is baad..’
After a lot of irritating everyone in the house, around 9pm, this guy lands up in the bed. He turns and rolls for sometime and asks ‘amma can i hav some wather (water)..’ and makes me go downstairs and get him water.. everyday.. After another 20 to 30 minutes of turning around, jumping, playing, talking, he finally rolls over wrapped in a 5feet by 5feet comforter and sleeps. Before he closes his eyes, he says ‘i lub u amma’ gives me w kisses and says ‘i dont want to sleep..’
A thousand expressions on his face, this huggable, lovable, little brat of mine .. 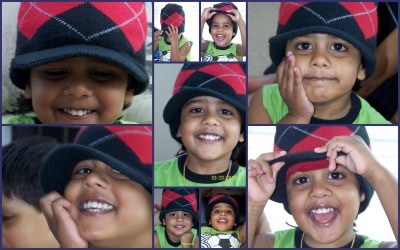